Do you need to use the basilic vein for an autologous arteriovenous fistula (AVF)? This is really a good idea. Autologous vein, no synthetic graft material, almost always available. Ok, everything is good. Are there any drawbacks?

Unfortunately, there are. It usually demands a relatively big procedure, needing one long or multiple smaller incisions on the arm. Local anesthesia is an option but the patient needs to can cooperate. Another issue is the vein’s proper orientation. Due to the fact that a long segment of the vein must be mobilized and tunneled on the anterior area of the arm, the danger of graft twisting is there. And graft twisting means, almost always, occlusion. How can you deal with the situation? I have tried various ways. In most of the times, when the procedure is completed a doubt is always there. Is it working? And will it be working for some time at least in the future? Well, let me tell you my best way of reducing the possibility of twisting and losing the graft.

I make a long unique incision, above the full length of the basilic vein, on the medial side of the arm. I find the vein somewhere, and dissect it along its way from the elbow up to as close to the armpit as possible. Then, I divide it at its distal end, (almost) always after its bifurcation in two main branches somewhere near the elbow. I flush it with heparinized normal saline and gently dilate it. Now it’s time for the anastomosis with the brachial artery. I prefer NOT TO PUT THE VEIN GRAFT IN A NEW SUPERFICIAL TUNNEL. Whenever I did it, I ended up thinking whether I had twisted the graft or not. So what I do? 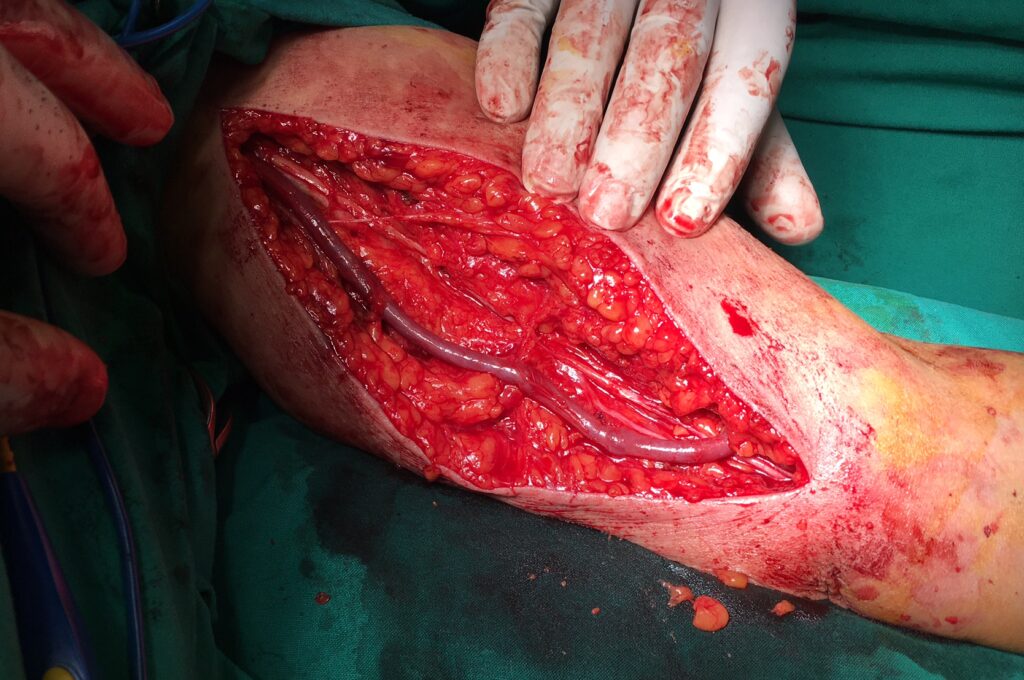 I leave the vein inside the arm wound. I make the anastomosis keeping the vein properly oriented. This is something relatively easy as the total length of the vein lies in the wound, in front of my eyes and I can be sure that it does not twist. After I have completed the anastomosis, I should have a very good palpable thrill on the vein. Is it so? It should be. The AVF has been created, and it must look a good one. Now, how I am going to put it on a superficial layer just under the skin?

Easy peasy. Holding the skin of the anterior wound edge with a toothed forceps and using the diathermy I undermine the skin along almost the total length of the wound. I try to undermine a width of about 2 cm under the anterior skin flap and no more than 0.5 cm deep under the skin. I am trying not to be closer to the skin as there is a possibility of skin necrosis and perforation. By doing that I have two benefits. First, I have created a superficial pocket to set my AVF.  And second, I have created a subfascial layer (which is the “floor” where the AVF lies) which can be used to close it with the subfascial layer of the other side of the wound. Thus, I approximate the wound edges without pressing the vein graft, which remains on a subdermal level, not-twisted with a nice palpable thrill. Finally, I close the skin with skin clips, and that’s it. The basilic vein transposition and AVF is ready.

You can see how to create this subcutaneous pocket in the following video.

Let the blood … “back” flowing

How to do an anastomosis with the parachute technique, …almost without any help

A “tent-suture” for correcting a bleeding from the anastomotic line